Yesterday, Thursday June 15, 2017, Governor Andrew Cuomo announced that he will nominate Paul G. Feinman to serve on New York's Highest Court. Feinman is currently a Justice on the state's intermediate court, the Appellate Division, and specifically the First Department which sits in Manhattan. 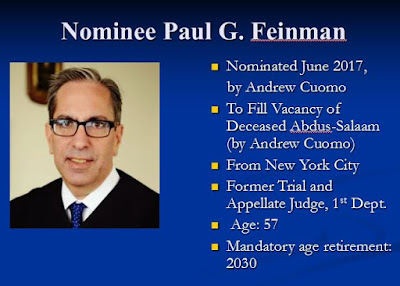 Feinman had been elevated to the Appellate Division by Cuomo in 2012. He was the first openly gay man to sit on that court and, if confirmed by the state senate, he will be the fist openly gay Judge on the Court of Appeals.
(At this time, the Senate Judiciary Committee has not yet scheduled a hearing. The Senate itself finishes its session and departs next Wednesday, June 21.)

Feinman was selected by Cuomo from the list of seven provided to the Governor two weeks ago by the Commission on Judicial Nomination. At the Governor's urging, the Commission completed its business in very short order. Beginning April 14, upon the official notification of the vacancy created by the sudden death of Judge Sheila Abdus-Salaam, the Commission began soliciting applicants, conducting interviews, and producing a list of possible nominees. Instead of the statutory allowance of 120 days, the Commission finished its work in just 1 1/2 months.

Justice Feinman is a graduate of Columbia University and the University of Minnesota Law School. He spent the fist several years of his with the Legal Aid Society of Nassau County and New York. He then served several years as a law clerk to a judge who sat on state Supreme Court (i.e., trial court) and then on the Appellate Division.

In 1996 he was elected to NYC Civil Court and was reelected in 2006. In 2004, he was selected by then-Chief Judge Jonathan Lippman to serve as an Acting Justice of  Supreme Court (highest trial court) Three years later, he was elected to that court and, in 2012, Governor Cuomo elevated him to be a Justice of the Appellate Division.

In short, Feinman has spent a career in government, all of it arguing or serving in and on courts. Beyond that, he has been very active in judicial and bar groups. He has, for example, served as the president and then chair of the supreme court justices association, and as the president of LGBT bar and judicial groups.

Feinman is 57 years old, born in January 1960. Under New York's (moronic) mandatory age-70 retirement for Court of Appeals Judges, he will be able to serve for 13 years of the full 14 year term, retiring at the end of 2030.

Notably, if and when Justice Feinman is confirmed, the composition of the Court of Appeals will include:
1 African-American Judge (Judge Rowan Wilson),