The Court of Appeals List: The Commission's Recommendations for the Abdus-Salaam Vacancy

The New York Commission on Judicial Nomination released its list of recommended candidates for the state's highest court. Seven names were presented to Governor Andrew Cuomo this past Thursday. He must select from that list to fill the vacancy on the Court of Appeals created by the tragic death in April of Judge Sheila Abdus-Salaam.

By state law, the Governor must make his choice no later than 30 days from when he received the list. The state senate must then act on his nominee, hopefully--as the Governor has made clear he would like--before the close of the legislative session at the end of this month.

As for the list itself, it is another fine one. It continues what has become customary for the Commission to produce strong lists This became especially true in recent years when former Chief Judge Judith Kaye assumed the position of Chair and added considerable gravitas, energy and insight to the application process.

With Kaye now deceased, the interim Chair, Leo Milonas--former Chief Administrative Judge of the New York State court system, former Appellate Division Justice, former president of the New York City Bar Association, etc. etc.--has by all accounts taken that legacy quite seriously. Together with a staff that includes the highly regarded Henry Greenberg as Counsel (notably, among many other things, a former law clerk to Kaye), the Commission would seem to be in very good hands indeed. And that is very good news for our high court. 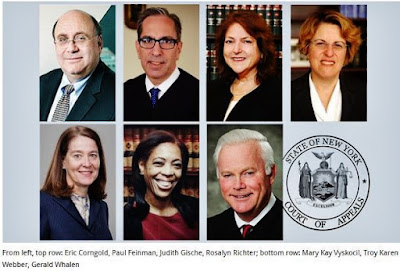 Quite a diverse group. Certainly quite a contrast from what we see at the Supreme Court. And diversity has been a real strength at the Court of Appeals. It is for any high court.

The members of such courts, whether the Court of Appeals or some other state's highest court or the U.S. Supreme Court, simply cannot escape exercising judgement when deciding the close, policy-laden cases that come before them. These are cases where there are strong legal reasons for both--or all--sides. Where the plain words of some legal provision or the judicial precedents do not dictate a particular result. Where the judges judgements must be exercised to pick and choose and thus to decide how to resolve the issues.

In this type of an enterprise, i.e., appellate decision-making on a court of last resort, diversity is a huge plus. Different backgrounds, schools, careers, experiences, perspectives, deeply held beliefs and values all come into play and all contribute mightily to a wiser, more knowledgeable and insightful result. Stated otherwise, they help to avoid more narrow-minded, more ignorant decisions.

Now politically speaking, sure, would a governor like Andrew Cuomo like to please constituents and even make history with his selection? Of course! (Just like a governor in a much more homogeneous state or a president with a "traditional-values" base would want to appeal to their constituents.)

So let's suppose that Governor Cuomo looks at the list given to him by the Commission and does decide to widen the Court of Appeals' diversity. He also decides that he'd like to make history. Now, no matter who he chooses from among the seven names, that individual will have an impressive resume and comes to him well-regarded and recommended by the independent commission. He can hardly go wrong.

So let's say the Governor goes with selecting the first openly gay judge for the high court. Suppose, for example, he chooses Rosalyn Richter. (Among other reasons, I use her as an example because we are fellow alums of Brooklyn Law. I don't know her personally, but by reputation.) If the Governor were to do so, no doubt some would scoff at the selection as being based solely on Richter's being gay or disabled or both. Also no doubt, others would praise the Governor for doing just that. And further no doubt, the Governor would have scored some political points for enhancing the Court's diversity and for making history.

But beyond all that, or perhaps prior to all that, Judge Richter does have a strong reputation as being a very smart, conscientious, and gutsy judge and, by all accounts relayed to me, would be a very fine choice.