We've seen how the Scalia-esque approach to judicial decision-making avowed by now-Justice Gorsuch would have precluded cherished landmarks in American history. [See Part 2; Part 1.] His "focusing backward, not forward," insisting on what constitutional provisions specifically meant "at the time" they were drafted and ratified, is directly at odds with the vigorous enforcement of the overarching, fundamental principles at the heart of those provisions. 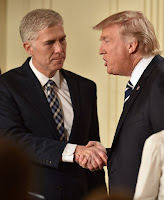 We've discussed how that Gorsuch-Scalia approach to constitutional decision-making has been employed to fight, and then to condemn, virtually every advance in the fulfillment of equal protection, of due process, and of freedom from government intrusion into private matters. Indeed, virtually every cherished advance in the protection of our civil rights and liberties.

The same is true for the rights of the accused. Those fundamental rights in our criminal justice system which we now take for granted.

Most of those cherished criminal justice rights became protected because of landmark decisions that rejected traditional, "focusing-backward" practices that were based on what the Constitution was believed to permit "at the time." In those landmarks, the Gorsuch-Scalia jurisprudence--many will object to even calling it "jurisprudence"--was repeatedly rejected in the interests of much higher constitutional values.

Of course, most of those who espouse that Gorsuch "backward-looking," "at the time" approach are actually far too embarrassed to denounce those landmarks today. But their ilk did exactly that when those landmarks were being considered and decided. And they condemned those advances in criminal justice--and some still do--using the same so-called "originalist-textualist" arguments embraced by Gorsuch and Scalia.

Here are a few of those advances in criminal justice:

Each one of these criminal justice landmarks and countless others were possible because the Supreme Court avoided the Gorsuch approach. Instead of simply "focusing-backward" and applying what the words specifically meant "at the time" they were enacted, the Court gave life to the broader principles of justice, equity, and decency that underlie the constitutional provisions dealing with the rights of the accused. In fact, the "focusing-backward," "at the time," so-called "originalist-textualist" arguments were used to oppose those landmarks and are still used today to denounce, disparage, dilute, or try to undo some of them.

Should we go back, before these landmarks, before the right to counsel was enforced in Gideon? Or privacy in Katz? Or protections against double jeopardy and against compulsory self-incrimination as in Malloy and Benton? Etc., etc.

And what about advances in the future? Improvements and greater fulfillment of fundamental constitutional principles? Do we really want to forego that?

Well, that going back and foregoing advances is precisely the meaning and heritage of the Gorsuch-Scalia  "focusing-backward," "at the time," so-called "originalist-textualist" approach to constitutional decision-making.

Next in this series, we'll look at some of the actual decisions and opinions authored by now-Justice Gorsuch while he was an appeals court judge.