Gorsuch, Part 4: His (Backward and Extreme) Past IS Prologue 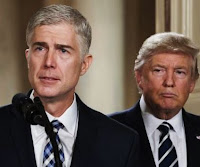 At his confirmation hearing, Democratic Senators harped on an opinion that then-Judge Gorsuch had written involving a fired truck driver. In his opinion, Gorsuch took the position that the company was within its rights to fire the trucker who had left his rig on the side of a highway--even though the trucker had done so in order to save his life, which was in danger, because he and his rig were stranded in a severe winter storm.

At the confirmation hearing, Republican Senators, as well as Gorsuch himself, sought to downplay the Democrats' criticism. They insisted that this particular opinion did not really represent any overall bias against workers, or in favor of business, or reflect a callous indifference or ultra-conservative ideology.

The truth of the matter is this. Anyone willing to actually review Gorsuch's record as a federal appeals court judge, and willing to be honest about what that review revealed, would have to acknowledge that his trucker opinion was fairly typical--not an aberration--and that Gorsuch's record was ultra-conservative. Good or bad, that is what it was. Not moderate. Not balanced. Not neutral in any real sense of that term. But overwhelmingly, ideologically, one-sided.

Of course, that should be no surprise. That is exactly why the Federalist Society and the Heritage Foundation--too institutions that are unabashedly conservative [Again, good or bad.]--recommended Gorsuch to Trump. Nor should that be a surprise to anyone who cared to pay attention to what Gorsuch had previously said and written about the role of judges. And more to the point, about his view of judicial decision-making. In my own view, as I have written previously, it is "extreme and backward." [See Part 3; Part 2; Part 1.]

Now that may sound good to some. That may indeed be what some believe to be appropriate for a judge. That is, a judge should strictly adhere to the past, strictly oppose judicial attempts to move the law forward, strictly insist on preserving those "traditional" values such as old school religion, free market capitalism, etc., etc.

But whether one believes that being "extreme and backward"--in that sense--is good or bad, preferable and appropriate in a judge or not, it cannot seriously be disputed that Gorsuch's record is just that. Sure, anything can be disputed, just as some of the Senators and commentators disputed any such characterization. And especially if one is entirely unfamiliar with Gorsuch's record, or if one is so ideologically motivated that Gorsuch's actual record is simply denied.

So let's take a look at Gorsuch's record. And since dissenting opinions, like Gorsuch's opinion in the trucker case, are so revealing about what the authoring judge thinks is important--i.e., important enough to disagree openly and take a stand against a majority of that judge's colleagues--let's focus on those.

We'll begin with employment law cases. They demonstrate that siding against workers, even in the most sympathetic cases, was the pattern--not the exception--for Gorsuch.

Worker/Employer
TransAm Trucking, Inc. v. Administrative Review Board: This is the fired trucker case. The majority of the appeals court held that the need to save his life necessarily justified the trucker's leaving his rig. Judge Gorsuch disagreed; in dissent he argued that the employment contract and the employer's rules did not permit the trucker to leave, regardless of the dire circumstances.

Compass Environmental, Inc. v. Occupational Safety and Health Review Com’n: The majority upheld OSHA's finding that the company committed a serious safety violation by failing to train its now-deceased employee on avoiding an electrocution hazard at work. Gorsuch dissented; he argued that the company only violated its own internal rules.

N.L.R.B. v. Community Health Services: The majority upheld the NLRB's award of backpay to workers where the employer had wrongfully reduced their working hours. Gorsuch dissented; he argued that the workers' backpay should be reduced if they had taken a "second or 'moonlighting' job" to make up for their reduced hours.

Strickland v. United Parcel Service, Inc.: The majority held that the evidence that the female worker was treated worse than her male co-workers entitled her to a jury trial on her sex discrimination claim. Gorsuch dissented on the ground that, in his view, the evidence showed that the employer harassed male workers too.

See a pattern emerging?
Let's continue with a few other civil cases.
(We'll look at criminal cases in the next post.)

Consumer Protection
Ragab v. Howard: The majority held that the plaintiff was entitled to sue the corporate defendants for violating consumer credit repair laws. Gorsuch dissented; he argued that, despite inconsistencies in the parties' several agreements, the "non-essential [procedural] terms" show that the plaintiff should be forced into arbitration.

Right to Choose
Planned Parenthood Association of Utah v. Herbert: The majority adhered to its original decision--i.e., it declined to rehear the case--in which it had ruled in favor of Utah Planned Parenthood. The latter had claimed that the governor's stated reason for stopping funding for Planned Parenthood was pretextual, and that his true motivation was to punish the exercise of constitutional rights. Gorsuch dissented; he argued on procedural grounds for a rehearing and on substantive grounds that the governor had the authority to discontinue the funding.

Church-State Separation
American Atheists, Inc. v. Davenport: The majority adhered to its original decision--i.e., it declined to rehear the case--in which it had ruled that Utah's action, erecting twelve-foot high white crosses along public highways to honor fallen state troopers, was an unconstitutional endorsement of a certain religion. Gorsuch dissented; he argued that the original decision was wrong because only an "observer [who was] biased, replete with foibles, and prone to mistake" would believe that the white crosses were endorsing a religion. [Sic!]

Green v. Haskell County Board of Com’rs: The majority adhered to its original decision--i.e., it declined to rehear the case--in which it had ruled that the erection of a Ten Commandments monument on county courthouse grounds was an unconstitutional government endorsement of religion. The proposal for the monument had been approved by the county board when a local resident told the officials that "the Lord had burdened [his] heart" to create it. Gorsuch dissented; he argued that only "the perceptions of an unreasonable and mistake-prone observer" would lead to the majority's conclusion that religion was being endorsed.
[Again, sic! One may disagree with the "reasonable observer/endorsement" test to determine a constitutional violation. But it can hardly be denied that a perfectly rational observer might well perceive that religion was indeed being endorsed by a monument to the Decalogue--presented to Moses by God--on government grounds.]

Do those dissents of Gorsuch--those occasions where he felt strongly enough to disagree openly with his colleagues and author an opinion criticizing their decision--demonstrate that he's a moderate? Neutral? Balanced? Or ideologically ultra-conservative?

In the next post, we'll look at Gorsuch's dissents in criminal cases.
(It's not hard to guess what pattern emerges. Hint: it's neither pro-accused nor moderate.)
And following that, we'll look at his record to date on the Supreme Court.
(Same.)