While the high courts of Iowa and New York appear to be moving in one direction, the U.S. Supreme Court seems to be proceeding [continuing] in the other. While Iowa and New York seem intent on protecting equal rights and privacy, the nation's high court seems to be accelerating an agenda to do the opposite. (For previous discussions on New York Court Watcher about these developments, see Notable Miscellany: Iowa Equalizes Marriage, New York Questions GPS Surveillance, and the Supremes Dilute Anti-Discrimination (Part 1 - Iowa), April 7, 2009, and (Part 2 - IA & NY [and the Supremes]) , April 8, 2009.)

While the Iowa Supreme Court shows that it's serious about equal protection by requiring that same-sex couples enjoy an equal right to marry, and the New York Court of Appeals seems ready to break again from the U.S. Supreme Court's persistent weakening of search and seizure safeguards, that latter court was busy undermining yet another rights-enforcing precedent from a more rights-protective era.

This time, the Supreme Court was doing so to dilute the anti-discrimination mandates enacted by Congress over 40 years ago. And it did so by overruling--Oh, I mean "distinguishing"!--a 35 year old decision of the Court enforcing that law.


In 14 Penn Plaza v. Pyett, a 5-4 ruling issued earlier this month, the Supreme Court reconsidered that 35 year old precedent which insured that the Age Discrimination in Employment Act of 1967 had some teeth. The Court's majority in the new decision spoke through an opinion authored by Justice Clarence Thomas.

So, the decision in Pyett was 5-4, and Thomas wrote for the majority. Need more be said? Anyone even vaguely familiar with the Court can be pretty sure that the decision was unfavorable to the employees claiming age discrimination. And they'd be right. (Previous posts on New York Court Watcher examined the Justices' voting patterns, including in discrimination cases. See GRAPH-ic Recap - Supreme Court's 2007-08 Term: The Defining Decisions (Parts 1 & 2 Recap in Graphs: Discrimination & Cultural Issues), Sept. 24, 2008, and Supreme Court's 2007-08 Term: The Defining Decisions (Part 1: Discrimination), Sept. 16, 2008.)

As discussed in previous posts [just cited], the voting pattern of Justice Thomas in discrimination cases is anything but equivocal. He, together with Justice Antonin Scalia, has a record evincingl hostility toward discrimination claimants (unless they are by white individuals complaining about affirmative action programs favoring minorities--but that's another discussion). His and Scalia's sympathies are clearly with those facing discrimination complaints. Indeed, the complaints--and perhaps the anti-discrimination laws themselves--are treated by them as little more than nuisances.

Yes, Thomas and Scalia vote like political conservatives. But they seem particularly antipathetic to laws hampering the freedom of individuals and organizations to make decisions differentiating between people and to pick and choose among them. So just about any arguably legitimate interest seems to win their votes over the interest of fighting discrimination.

Take a look at the following chart. It is from the Septemeber 24, 2008 post. It depicts the voting of all 9 Justices in the 4 discrimination cases among last term's "defining decisions." Note especially the contrast between the records of Thomas and Scalia and the records of all the others. 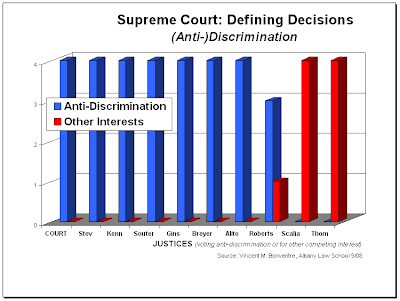 Not once did Thomas (or Scalia) vote on the side of the party complaining about discrimination. Criminal or civil, race or age, statutory or constitutional, discrimination itself or retaliation for complaining about it. Every other Justice did, in most of the cases or all of them. The long and short of it is that, again, if Thomas is in the majority--a fortiori if both he and Scalia are in the majority--it's a pretty good bet that the Court is ruling against the individuals claiming discrimination. That is exactly what he, they and it did in this month's decision in Pyett.

The facts in Pyett can be distilled to these: in the course of negotiations, a union agreed that any complaints by its members about discrimination would be submitted to arbitration as the "sole and exclusive remedy for violations." Stated otherwise, the union waived the workers' rights to go to court over discrimination in hiring, firing, promotions, etc., and agreed that all such complaints would be resolved via binding arbitration.

The problem with such an agreement is that it conflicts with the Supreme Court's 35 year old precedent mentioned earlier, Alexander v. Gardiner-Denver (1974). In that case, the Justices unanimously preserved the right of individual employees to bring a civil action in federal court to obtain relief for discrimination. The unanimous Justices specifically rejected the waiver of that right in an agreement entered by an employer and union.

The Supreme Court in Gardiner-Denver emphasized the priority of equal employment rights, and it refused to permit a union's interests in the collective economic benefits of its members to sacrifice the individual employees' rights to equal treatment. Additionally, the Court refused to permit unions and employers to bargain away the jurisdiction of federal courts to provide relief to discrimination victims, or to remove the courts from enforcing the national committment against workplace discrimination.

The Court repeated these concerns and reaffirmed Gardiner-Denver in at least 2 subsequent decisions: Barrentine v. Arkansas-Best Freight System (1981), and McDonald v. West Branch (1984). In fact, ever since Gardiner-Denver, the Court had been steadfast in forbidding agreements between union and management to waive the rights of workers to bring their claims to federal court. (See e.g., Wright v. Universal Maritime Service [1998].)

But today's another day, the current Court is another Court, some of the Justices are different, their priorities are different, as are their views about enforcing anti-discrimination laws and about affording judicial relief to discrimination victims. So, not too surprisingly, the Court in this month's 5-4 ruling in Pyett decided that the earlier decisions were no longer binding--or no longer meant what they certainly seemed to mean.

The federal trial court in Pyett refused to order the parties to arbitration (and found merit in the age discrimination complaint). The federal appeals court, the 2d Circuit, agreed. But the Supreme Court reversed. There's no problem any more with union and management agreeing that employees can't go to court with their discrimination complaints. Nor is there any problem with substituting arbitration for the powers of federal courts to enforce the nation's committment to equal rights. Nor is there any reason to believe that arbitration is a less favorable forum for vindicating discrimination claims.

No doubt, there are arguments supporting the arbitral hearing and resolution of employees' claims, including claims of discrimination in the workplace. Cost, efficiency, flexibility, fewer procedural and evidentiary rules that sometimes make it more of a chore than it need be to get to the bottom (i.e., truth) of the matter. Those are some of the usual reasons why arbitration is favored as a way to resolve all sorts of disputes. Favored by Congress, and oftentimes by the Court itself.

In the past, however, with regard to anti-discrimination laws, the Supreme Court was concerned above all else with insuring the fullest, most rigorous enforcement. The Court would not allow anyone to surrender the employees' rights to that full and rigorous enforcement of their equal rights in federal court. The Court would not allow anyone to preclude the federal courts' power to enforce the rights of employees under the nation's anti-discrimination laws.

But that is exactly what the Court has now allowed--and even embraced--in Pyett. The fullest, most rigorous enforcement of anti-discrimination laws is not the greatest concern. It's certainly subordinated now to the virtues of arbitration. The powers of federal courts to enforce rights under those laws is no longer deemed essential. Arbitration is now satisfactory.

And thus went one more example of the Court's ongoing change in its historic direction. And a direction that's the opposite of that in which some state supreme courts seem to be moving. Like Iowa with same-sex marriages. And New York with surveillance.