An earlier post on New York Court Watcher looking at Justices Antonin Scalia and Clarence Thomas was limited to presenting a set of graphs. They depicted the extent of voting agreement and disagreement each of those two had with each of their colleagues. (See Supreme Court: Voting W/ Whom? & Breaking Ranks When?--Focus on Scalia & Thomas [For now, The Graphs], Jan. 30, 2008.) 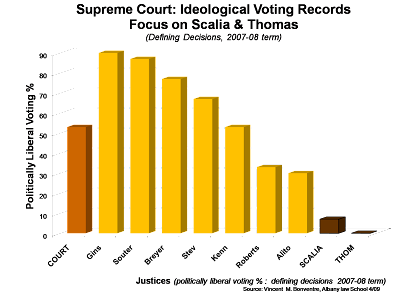 For example, look at what's depicted in Graph 1. It's the most evident aspect of Scalia's and Thomas's record, and the easiest to identify and label. It's the politically conservative character of their voting.

Stated otherwise, and as specifically depicted in this graph, their voting is the least politically liberal among the Justices. They do not often vote for politically liberal results. Indeed, they very rarely do so, and certainly less frequently than any of the other members of the Court.


Let's be clear what is meant here. "Politically liberal," in the context of the issues the Court resolved in the defining decisions, refers generally to siding with parties claiming discrimination and seeking relief; upholding the rights of the accused even at the expense of law enforcement; supporting habeas corpus for alien detainees, considering international legal norms in deciding national legal questions, favoring gun control over unhampered gun rights, and sympathizing with other similarly urban/global/equalitarian values in cultural matters; and supporting the reform of established political institutions and removing restrictions to political participation. "Politically conservative" refers generally to the opposite.

[Note that the terms "liberal" and "conservative" are NOT being used in senses referring to intellectual or philosophical schools of thought. Rather, they are more coterminous with the preferences of today's national Democratic and Republican parties, respectively.] 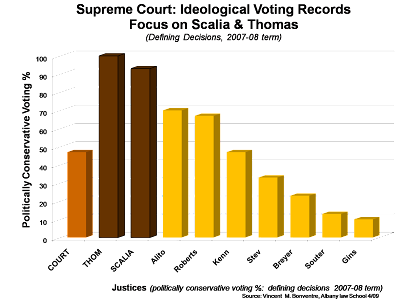 Oh, okay, let's say it differently for the formalists who may be reading. Of course judges don't render decisions according to their own values. They do so according to some formulaic, entirely neutral methodology. Well at least the good ones like Scalia and Thomas do that.

And in applying this formulaic, neutral methodology for deciding cases, Scalia and Thomas just happen to reach decisions that political conservatives (like themselves) would prefer. In fact, they virtually always reach such decisions. Even though they really are acting neutrally, non-politically, and without regard to their own personal (politically conservative) values. How coincidental. Indeed, how utterly miraculous!

What nonsense.
[As Joan Rivers might tell anyone who clung to such foolishness: "Grow Up!!"]

The suggestion is not that Scalia and Thomas are alone in injecting--"informing", to be more delicate--their decisions with their own personally held values. Whether those values be political, philosophical, sociological, anthropological, or something else. No. All the Justices do. All judges do. Liberals as well as conservatives.
[Okay liberals, you don't really think that Justices Souter's and Ginsburg's lopsidedly liberal voting records are purely coincidental either, do you??]

Let's break that down into the separate categories within those cases: anti-discrimination, cultural issues, law & order, and political process. Doing so makes Scalia's and Thomas's voting records even more vivid. Even more stark. Take a look.
GRAPH 3 (click to enlarge) 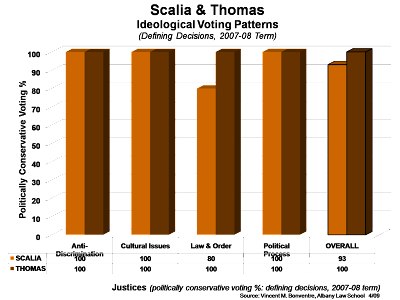 As we've discussed in some of the earlier posts, Scalia and Thomas both voted 100% politically conservative in the anti-discrimination cases. That is, they voted against the person claiming to be the victim of unlawful discrimination and seeking some relief. The cases involved race and age discrimination, in civil and criminal cases, in employment and jury selection, alleging either discrimination or retaliation for complaining about it.

Scalia and Thomas never found the claims meritorious. Again, as discussed in previous posts, every other Justice sided with person claiming discriminatory treatment in all or all but one of the cases.

As for the "cultural issues" cases, Scalia and Thomas again voted 100% politically conservative. On gun control, the Gitmo detainees, the authority of international law, the death penalty. What would be the position of a conservative Republican politician? That's how Scalia and Thomas voted every time.

In the "political process cases, both Scalia and Thomas were again 100% politically conservative. So, for them, voter ID laws are OK, campaign finance restrictions are not, and New York's back-door method for nominating trial court judges does not violate the Constitution (despite the findings of the federal trial and appeals courts who had concluded otherwise). [It should be noted that the Justices were unanimous on that last issue. The point, however, is that while the votes of some liberal Justices might have been a surprise, the votes of Scalia and Thomas were not. Rather, they were entirely consistent with the strongly politically conservative character of their voting overall.]

And speaking of overall. Thomas's voting in these 4 categories combined was 100% politically conservative. (The math was not difficult.) Scalia's was 93%. (What a libera!)

Finally who was voting with them--or vice versa, who did Scalia and Thomas vote with--and how often? Take a look at this final graph.
GRAPH 4 (click to enlarge) 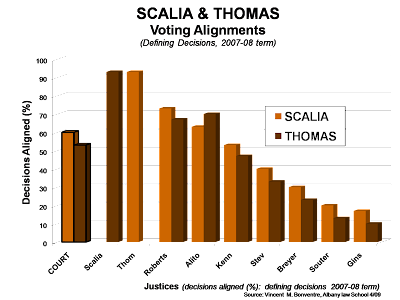 Yep, Scalia and Thomas saw eye to eye with Ginsburg in virtually none of the cases. Okay, to be a bit more precise, they did so very rarely. But that's not unexpected since Ginsburg is one of the Court's political liberals. Well, her voting record is similar to what would be expected from a liberal Democratic politician. So it would actually be shocking if Scalia and Thomas were aligned with her very frequently. (About Ginsburg's record, see Supreme Court: Ginsburg's Place Among Her Colleagues--A Voting Profile (Part 3), March 1, 2009; (Part 2), Feb. 25, 2009; and (Part I), Feb. 22, 2009.)

Scalia and Thomas don't usually see eye to eye with Justices David Souter or Stephen Breyer either. (With Souter, 20% and 13%, respectively. With Breyer, 30% and 23%.) Other than with each other, they agree most often with Chief Justice John Roberts and Justice Samuel Alito. (With Roberts, 73% and 67%; with Alito, 63% and 70%.)

All of this adds up to Scalia and Thomas aligning with the Court itself--i.e., with a majority of the Justices in each case--60% and 53% of the time, respectively. That's considerably less frequently than the Court's other (perhaps less staunchly) conservative members, Roberts and Alito. They were with the Court's majority 87% and 80% of the time, respectively. Only Ginsburg (60%) and Souter (60%), the Justices with the most politically liberal records, were aligned with the Court's majority at levels as low as Scalia's and Thomas's. (For more on how frequently the Justices were in the majority or in dissent, see Supreme Court: Justices In The Majority (Part 3--In Dissent Over What?), Dec. 20, 2008; (Part 2--And Compared to In Dissent), Dec. 17, 2008; Supreme Court: Justices In The Majority, Dec. 8, 2008.)

Of course, even they do break ranks with their ideological allies on the Court every once in a while. Thomas may not have done so in any of the defining decisions. Scalia did only once. But they both did break ranks in an extremely important case decided yesterday, Arizona v. Gant. An automobile search case. The Supreme Court, in a 5 - 4 decision, overruled (although without admitting so) it's Belton rule--i.e., if the driver is arrested legally for any offense whatsoever, the police may search the passenger compartment of the car thoroughly, even if there's absolutely no connection between the search and the reason for which the driver was arrested. (E.g., searching the car after a speeding arrest.)

The Supreme Court effectively adopted the rule of the New York Court of Appeals, the state's highest court, which had immediately rejected the Supreme Court's rule in Belton. Speaking through then-Chief Judge Lawrence Cooke, New York's court--in that same Belton case--prohibited searches of the car unless there could be evidence related to the offense.

Ah, once again, the New York Court of Appeals (and Chief Judge Cooke) got it right, and the Supreme Court eventually sees the light. It used to happen that way.

More on Arizona v. Gant in the next post.

For now, Scalia and Thomas are politically conservative. (Surprise, surprise.) Very much so. It's right there in their voting patterns.