[Skip the italics to skip the personal notes.
It's been a week and a half since the last post. My excuse? The end-of-semester sprint. Racing to finish the courses, preparing the exams, holding review sessions--and eventually the grading. UGH!!
Well, it's not as bad as actually having to take the exams. The students have it much worse than we do. Don't let any professor tell you differently.
If I had my way, I'd just bring each student in for a talk about the course--a few questions, a brief discussion about the overriding principles and concepts covered.
What about anonymous grading? OK, put a bag over my head and give the student a voice-disguising device.
But I'll bet I can get a more accurate assessment of a student's knowledge and understanding of the subject matter in a 10 minute discussion than in a 3 hour written exam. And it would be a much less harrowing experience--both for the exam taker and the grader.
IAE, it's not going to happen. So before I get buried in exam-grading, let's talk about Souter.]


Not exactly a bombshell. Justice David Souter is retiring. Well, he's leaving the Court. It's been no secret that Souter dislikes living in D.C. and wants to return to New Hampshire. The job's fine, but the place (probably including the people and the social scene) are just not for him.

[Hey, I can't blame him. I spent a year there as a Supreme Court Fellow and found the place pretty dreadful--let me count the ways. I couldn't wait to get back to God's country in upstate New York.]

So what--where--has Souter been on the Court? Well, he's been a member of the liberal wing of the Court. That is, he has been one of the Justices whose voting has been more politically liberal than that of the fairly conservative Court as a whole. Indeed, he is one of those who has most consistently opposed the rightward direction of the Court under Chief Justice William Rehnquist and, now, John Roberts.

Let's make it visual. Here are a few graphs which illustrate Souter's position on the Court's ideological spectrum.
GRAPH 1 (click to enlarge) 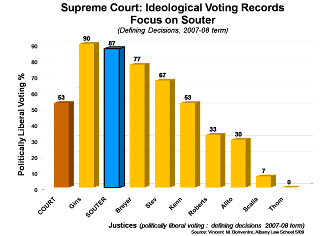 What is plain is that Souter's voting record has placed him at the liberal end of the Court's ideological spectrum. He's been right (left?) there with Ruth Bader Ginsburg. (See the earlier posts on New York Court Watcher examining Ginsburg's place on the Court: Supreme Court: Ginsburg's Place Among Her Colleagues--A Voting Profile (Part 3), March 1, 2009; (Part 2), Feb. 25, 2009; and (Part I), Feb. 22, 2009.)

Together with John Paul Stevens and Stephen Breyer, he and Ginsburg have for 15 years typically voted together as the Court's liberal block on the hot-button issues. You know, separation of church and state, abortion rights, affirmative action, rights of the accused, rights of gays and lesbians, Bush v. Gore of course, and other controversial constitutional matters which usually divide the Justices and the people along the same, pretty consistent political lines.

And as for hot-button issues, let's take a look at how Souter voted on specific types of issues in the "defining decisions" of last term that we've been discussing on this blog for the past few months.
GRAPH 2 (click to enlarge) 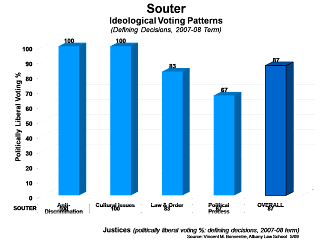 As depicted in Graph 2, Souter sided with the party complaining about discrim-ination in each of the cases. Criminal or civil cases, race or age discrimination, discrimination itself or retaliation for complaining--Souter found merit in the claim.

Likewise on the "cultural issues," Souter's record was 100% politically liberal. Whether it was gun rights, treatment of the Gitmo detainees, the death penalty for child rapists, the binding nature of international law, or other such politically divisive questions, Souter took the politically liberal position each time.

On "law and order" issues Souter's record was not quite perfectly liberal. In one case, he went along with the Court's decision that a search by Virginia police that violated Virginia law was not an "unreasonable"--and therefore illegal--search under the Federal Constitution. Otherwise, whether the issue was the death penalty, ameliorative sentencing, ambiguity in a child pornography statute, or other crime control versus due process questions, Souter's vote was what would be expected of an ideological liberal.

Finally, on the "political process" issues, Souter voted to uphold campaign finance restrictions and to strike Indiana's Voter ID law--the politically liberal positions. But he took the more conservative position when he joined the Court to uphold New York State's concededly shameful nominating system for electing trial judges (and thereby to disagree with the federal district court and appeals court, both of which found the system so rigged and unfair that it violated basic due process). His overall record on these issues was liberal and, in fact, no other Justice's record was more so.

Let's put the foregoing in context. Let's compare Souter's voting record on these issues with that of the fairly conservative Chief Justice, the very conservative Antonin Scalia, and with the Court as a whole.
GRAPH 3 (click to enlarge) 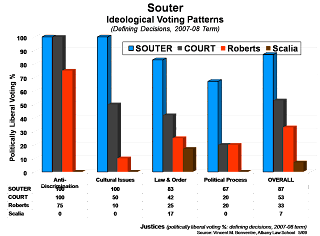 In the discrim-ination cases, the Court's record was the same as Souter's. Chief Justice Roberts's was slightly more conservative. Scalia's was the polar opposite of Souter's.

In the "cultural issues" cases, the Court was half as liberal as Souter. Roberts was much more conservative, and, again, Scalia was Souter's polar opposite.

In the "political process" cases, the Court and Roberts were equally more conservative than Souter, and Scalia was even more so--in fact, perfectly conservative.

So, "overall" is no surprise--and indeed exactly what Court watchers would have expected even without this examination. Souter's record, the most liberal. The Court's, about half as much. Roberts's record, a bit more conservative than the Court. Scalia's even more so, and virtually the opposite of Souter's record.

Well, that should give a pretty good picture of how Souter has been voting on the Court. And how his record compares with that of the Court itself and with two non-liberal colleagues.

In the next post, we'll look at how frequently Souter's been in the ruling majority of the Court, and how frequently he has been voting with each of the other Justices--i.e., who he's been agreeing with and who not.