In the last two posts, we looked at the sharp drop in criminal appeals (Criminal Leave Applications [CLA's]) granted at the Court of Appeals in the past few years and at the frequency--and rarity--of grants by each of the Judges. Now let's see how the Court has been deciding those appeals and how each Judge has been voting: pro-prosecution versus pro-accused.

As explained several times on New York Court Watcher, and countless times by judicial scholars through the years, these non unanimous decisions are the most revealing. The unanimous decisions, by contrast, are often--if not usually--at least as much compromise as conviction. But with divided decisions, at least one member of a court feels strongly enough to publicly air a disagreement and to highlight the flaws in the majority's reasoning. Other members of the court are then forced to publicly take sides on competing arguments that are each strong enough to preclude unanimity.

Examination of these divided decisions thus indicates what is particularly important to the dissenting judge, as well as which side of the divisive issue is preferred by the dissenter's colleagues. A fortiori, examination of a pool of divided decisions shows the individual judges' preference patterns and thereby reveals their voting tendencies.
(See e.g., Lippman's Goat--What Gets It? [Part 1: Introduction]; Justice Alito's Goat--What Gets It? [Part 1].)

So how did each of the 7 Judges on New York's highest Court vote in the total pool of 28 divided criminal decisions last year. Take a look: 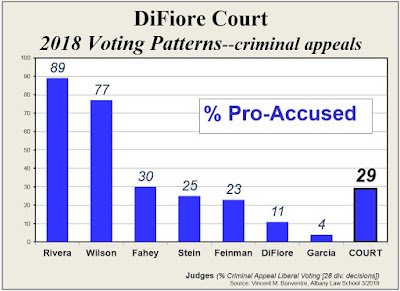 As the graph makes clear, Judges Jenny Rivera and Rowan Wilson found merit in the arguments on behalf of the accused far more frequently than anyone else on the Court. Notably, as seen previously, they are also the two Judges who granted many more criminal appeals [CLA's] than any other Judge.

On the other end of the Court's criminal appeals spectrum, Judge Michael Garcia virtually never sided with the accused. And as we saw previously, no one on the Court granted fewer CLA's--one. Perhaps not surprisingly, he is the Court's only Republican.

As for the Court as a whole, its decisional record was considerably more pro-accused (29%) than that of Garcia (4%) and of Chief Judge DiFiore (11%). By the same token, it was considerably less so than that of Rivera (89%) and Wilson (77%). It was roughly the same as the records of the 3 Judges at the center of the Court's ideological spectrum in criminal appeals: Judges Eugene Fahey (30% pro-accused), Leslie Stein (25%), and Paul Feinman (23%).

Let's now look at the very same records from a pro-prosecution perspective: 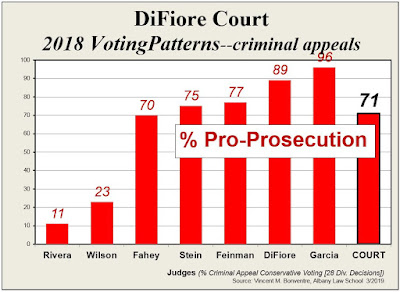 As the inverse of the figures in the first graph, this one shows Judge Garcia to have the most pro-prosecution record (96%), followed by the Chief Judge (77%). Judge Rivera (11%) and Wilson (23%) sided with the prosecution the least. The Court's 71% record in these divided criminal appeals--i.e., the ones so close that the Judges could not agree--speaks to its unmistakably pro-prosecution leaning.

Lest it be wondered whether 2018 was an aberration for the current Court of Appeals, here are the corresponding graphs for the previous year: 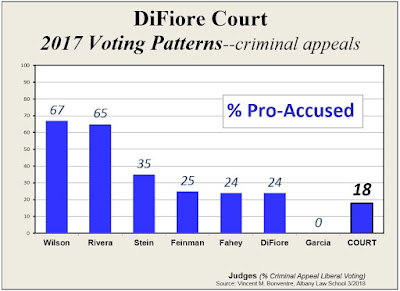 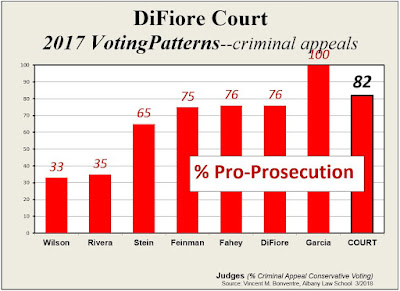 To be clear, none of the foregoing suggests that Judges Rivera and Wilson were usually more wise or fair or correct on the law and Judge Garcia the opposite. Nor does it suggest that that is not so. Or vice-versa.  Or even that the other Judges, whose records were less pro-accused and less pro-prosecution, were necessarily more clear-eyed and less ideologically driven.

What the foregoing does show--and quite emphatically so--is that, for whatever reasons, Judges Rivera and Wilson have found more merit in more arguments for the accused than the rest of the Court. And Judge Garcia, the same for the prosecution. At the same time, the Court itself in these close, non-unanimous cases, where it could legitimately have ruled either way, has largely been favoring the prosecution.