We previously looked at the stark disparity among the Court of Appeals Judges in the number of CLA's (Crimnal Leave Applications) they granted last year. Some Judges had comparatively high numbers. Others very low.

These figures underscore what is well known by attorneys who practice before New York's highest court, as well as by those who have worked there and by those who study it. Getting permission to argue a criminal appeal before the Court entails at least as much luck as merit. The chances of receiving the go ahead depend in large measure on which lone Judge was assigned the CLA. Which  single Judge happened to receive the CLA in the random and equal distribution system at the Court--a system in which that Judge alone decides yay or nay.

If the CLA happens to land on the desk of a Judge who liberally grants CLA's, the chances are relatively good. If  a much stingier Judge is assigned the CLA, well then the chances are much worse. It's a random and equal distribution system with arbitrary and unequal consequences.

Now, next up: comparative annual totals. That is, the annual number of grants by the Judges collectively over the years.

Well, not surprisingly, the annual totals do differ from year to year. Perhaps more surprisingly however, the annual totals have sometimes changed dramatically from one period to another. Indeed, the change has sometimes been so significant, that it is hard to imagine that mere happenstance is to blame. Especially, for example, when a precipitous drop in annual totals coincides with some significant and related event. A fortiori if that drop persists until a counter event occurs.

But whatever the causes, the fact is that the annual totals of CLA grants display stark disparities. Like the grant numbers of the individual Judges, the contrasts have sometimes been striking.

Let's take a look at the annual totals over the course of the last 3 decades. Those 30 years include periods under 4 Chief Judges. They begin with the last 5 years of the Court with Sol Wachtler at the helm, then continue through the era of Judith Kaye, then followed by the tenure of Jonathan Lippman, and finally ending in the present with Janet DiFiore in the center seat. 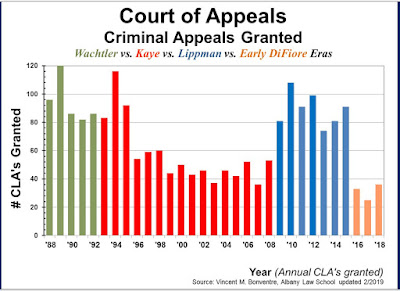 As the graph makes clear, there was a significant drop in CLA grants, a few years into the Chief Judgeship of Judith Kaye. Years later, there was a sharp rise as soon as Jonathan Lippman became Chief Judge. Most recently, the numbers have again fallen deeply under Chief Judge DiFiore.

The drop in 1996, a few years into the Kaye era, happened to follow immediately upon the newly elected Governor George Pataki's campaign of harsh public criticism against the Court. He and his cronies bashed the Court for being soft on crime, coddling criminals, caring more about criminals than victims, far too liberal...you know.
(I.e., the usual demagogic nonsense spewed by pandering politicians who typically don't have much of a clue.)

The Court's criminal decision-making did then take a turn to the right. It became more pro-prosecution. At the very same time, the Judges collectively began granting far fewer criminal appeals. The annual CLA grants actually dropped in half. Hmmm.
(I have studied and written quite a bit about this era and the attendant changes in the Kaye Court. I  did briefly discuss it in some related New York Court Watcher posts in the past. See e.g., NY Court of Appeals: Steep Cut in Criminal Cases (part 2); and Part 2: Dissents--The (very early) DiFiore Court [with graphs!].)

By the end of the Kaye era, the complaining voices were becoming louder and more numerous. Criminal defense lawyers were rather upset--veritably outraged--that so few CLA's were being granted. Also, there was the realization that getting a CLA grant with some Judges seemed a near impossibility.

Upon Kaye's retirement and the appointment of Jonathan Lippman to replace her, the new Chief Judge expressed his concerns--both publicly and among his colleagues on the Court. Suddenly, CLA grants surged. They actually doubled.
(See Joel Stashenko, "Chief Judge to Review Why Court Accepts Few Criminal Appeals," NYLJ, April 22, 2009. [Note: I was a source--on the record--for that article.]; also NY Court of Appeals: Granting Criminal Appeals--Up, Down, Now Up Again? [Part 1: Overview].)

The Lippman effect on CLA's continued throughout his tenure. When he retired, however, the number of CLA grants dropped again. Indeed, they have plummeted as sharply as they had surged under Lippman. In these first few years of the Court under Chief Judge DiFiore, the annual totals are less than half they were with Lippman.

Let's now display the foregoing in a more concise and easily digestible form than in the first graph. Let's reduce the amount of data by looking at averages. Let's look at the average annual CLA grant totals for the Wachtler era, the early Kaye and the late Kaye eras, the Lippman era, and the early DiFiore era (i.e., the first 2 full years of DiFiore's tenure, which are the last 2 years). Here it is: 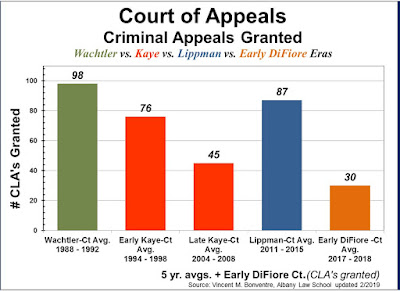 What we just discussed is there in black and white--well, in green and red and blue and rust. A rather high annual total in the Wachtler era (at least when compared to more recent periods). Followed by annual totals beginning to drop in the early Kaye era. Then a more dramatic drop by the latter part of Kaye's term. A sharp rebound during the Lippman era. And finally, back down--even below the late Kaye era--in the current era under DiFiore.

Consider one additional way to look at this data. As we saw in the previous post, two of the Court's seven Judges--Jenny Rivera and Rowan Wilson--granted far more CLA's this past year than their colleagues. No other Judge was even close. But lest it be thought that Rivera and Wilson are being excessive and out of step, the fact is that their CLA grants are actually much more in line with the Court of Appeals' record on CLA grants over the years.

In short, the Rivera-Wilson standard for CLA grants would certainly not be excessive--not even close. Indeed, it would only significantly exceed the late Kaye era. But, as is clear from the data and the 2 graphs, that late Kaye era was an aberration. The CLA grants were atypically low.

AND, the annual grant totals in the DiFiore era are, thus far, also aberrational.  Also atypically low. In fact, the grants are even lower than they were during the late Kaye era.

What was true when CLA grants plummeted during the Kaye era, immediately following Governor Pataki's harsh criticism of the Court for being too liberal and caring too much for criminals, is also true for the dramatic drop in these first few years of the Court under Chief Judge DiFiore. It is extremely difficult to believe that the change has been mere happenstance. That it is coincidental.

The precipitous drop in CLA grants in recent years evinces either a deliberate policy choice to reduce the number of criminal cases or, at the least, a pressing need once again for a Chief Judge to address such an inordinately high denial of the opportunity to have one's criminal case reviewed by the Court of Appeals.