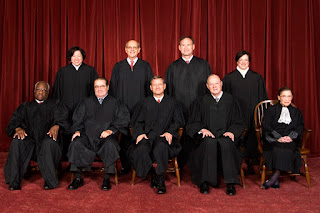 They're not judging; they're taking partisan sides.
They're not interpreting the law; they're choosing interpretations that fit their politics.
They're not neutral, detached arbiters of the law of the land; they're partisan politicians pushing their preferred policies.

That may sound harsh. It is.

This current Supreme Court is a disappointing, dysfunctional, dishonor to what the nation's highest Court is supposed to be. Certainly to what it has been at times in its history.
Times when it was truly the nation's most trusted and trustworthy branch. The nation's conscience. The nation's guardian of what we cherish most about our Republic. The nation's keeper and teacher of our loftiest aspirations.

No, the Court hasn't always been the ideal we were told that it was in grade school, or that the Court's own public relations touts. No, the Court has had its ups and downs in history. And we're now in one of those downs.

No real doubt about it if we're honest.

New York Court Watcher is not talk radio, and it's not FOX News. Criticism of the Court here is not any nonsense about liberal activist Justices making law instead of applying it. But neither is it about conservative Justices doing exactly the same, only in the opposite direction.

No, both conservatives and liberals on the Court are making law. Just as the Supreme Court always has and always must if it is to decide the cases about fundamental issues that have always come before it for resolution. Since the beginning of the Republic.

The denunciation here--yes, that's what it is--is about the Justices being blatant, blind or deliberate (?),  extreme, yes, shameless partisans. Both the conservatives and the liberals.

Only Justice Kennedy can fairly be excluded from the 2 camps. Yes, he's generally with the conservatives. But, not infrequently, he sides with the liberals. On matters such as gay rights, the death penalty, and juvenile justice. So Kennedy is not included when referring here to the conservatives, or to the liberals. And, indeed, he is the only Justice who does not seem to be lopsidedly, shamelessly partisan.

As for the rest of them, it's simply hard to escape the conclusion that they are, in fact, shameless partisans.

Let's take another look at the data and the graphs. This time somewhat reorganized for clarity and focus. And then we'll say a few words about the cases and the lopsided, partisan voting in them by the Justices.

Here, once more, the voting in the highly partisan-charged cases--i.e., cases involving guns, gays, religion, campaign finance, immigration, and the like. 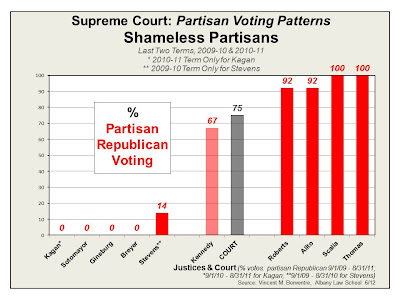 Just take a look at that contrast.
In the highly charged cases, the 4 liberals on the Court today--Ginsburg, Breyer, Sotomayor, and Kagan--never voted for the side that was favored by Republican politicians. (In 2009-10, when Stevens was still on the Court, he voted that way once.)

The 4 conservatives on the Court virtually always voted for the positions that were favored by Republicans. Scalia and Thomas always did in these cases. Roberts and Alito did an every case but one. 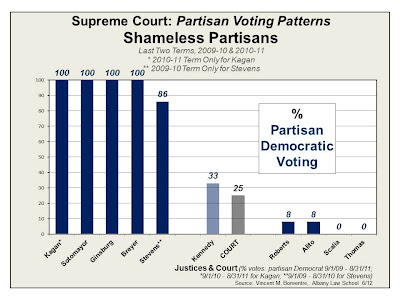 Take a look at that contrast again.

On guns:
None of the liberal Justices read the Constitution and constitutional history to mean that individuals have a fundamental right to bear arms that states may not violate. Not one? Not a single liberal who believes in zealously enforcing the Bill of Rights read any such thing in the 2nd Amendment?
By the same token, none of the conservative Justices read the 2nd Amendment to simply guarantee the right of states to maintain a "well regulated militia" to guard against tyranny. Not one? Not a single conservative who believes in "strict interpretation" and against finding rights not clearly stated?

On campaign finance:
None of the liberal Justices thought the 1st Amendment guaranteed the unhampered freedom to create communications about purely political matters and to spend the money necessary to do so. Not a single one of those vigorous guardians of the Bill of Rights found a problem with the federal government restricting the ability to engage in the very sort of commentary that's at the core of 1st Amendment free speech?
By the same token, none of the conservative Justices thought that the federal government has a compelling reason to regulate corporate financing in election campaigns. Not a single one of those "strict constructionists" or "textualists" or "originalists" interpreted 1st Amendment "freedom of speech" as something different than unrestricted spending by incorporated entities?

On gay rights & religious liberty:
None of the conservative Justices thought a state university could deny funding to a student religious group that discriminated against gays and lesbians. Not a single one thought the state's policy against discrimination was important enough to justify a rule requiring equal treatment to be eligible for funding?
By the same token, none of the liberals thought the student group's religious beliefs entitled them to an exemption from the state university's policy. Not a single one of those zealous guardians of the Bill of Rights had a problem with the state requiring the students to violate their religious beliefs as a condition for funding?

On sex discrimination:
None of the conservative Justices thought that women around the country who claimed that they suffered discrimination in hiring and promotion by Walmart stores could sue the company as a group. Not a single one thought that claims of sex discrimination in employment had a sufficient common thread to be joined in a class action?
By the same token, not one of the liberal Justices had a problem with Walmart having to defend against a variety of discrete, individual claims in one trial. Not a single one thought it unfair for a company to be forced to confront separate and, perhaps, entirely unrelated claims in the same lawsuit?

On broadcasting a trial (on same-sex marriage):
None of the conservative Justices thought it permissible for a federal trial judge and appeals court to allow the trial, challenging California's ban on same-sex marriage, to be broadcast to other federal courthouses. Not a single one thought that the widespread interest, the numerous applications, and the approval of both lower courts justified an exception to normal procedures?
By the same token, none of the liberal Justices saw a problem with the lower courts' failure to follow set procedures. Not a single one thought that the security risks incident to the broadcast of such a high profile, highly sensitive trial, to several locations around the country, demanded closer compliance with precautionary protocols?

On all of the foregoing and all the others among the highly partisan-charged cases:
The 4 conservative Justices are virtually always on one side. The 4 liberals on the other.

No. These are matters where conservative Republican partisans and liberal Democratic partisans are divided. And the conservative Justices and the liberal Justices on the Court vote along those lines.Those partisan lines.

It's blatant, and it's shameless--well actually, it's shameful.


In the next post, we'll review the Justices' ideological voting patterns. As we did here, we'll reorganize the graphs for focus and clarity.

As stated in previous posts, this series is based on my research over the last several weeks. The pool of cases on which my findings are based is explained at the end of each of 3 previous posts on New York Court Watcher. See Supreme Court: How Partisan? Ideological? Activist? (Part 1: Focus on Scalia) --with graphs!, May 1, 2012; Part 2: Focus on Justice Kennedy, May 3, 2012; Part 3: Focus on Justice Thomas, May 6, 2012]